All I have from that hardware list is the 8×8 in the shape of a UnicornHAT. Will see what time allows.

So it appears in about a week I can make an International Space Station (ISS) tracker!

I had all sorts of ideas that could use the UnicornHAT, but they needed sensors on the AstroPiHAT that I don’t have.  Here are some of the less crazy ones:

As AstroPi is going up to the ISS I started thinking how that could be incorporated. I follow @VirtualAstro on twitter who publishes ISS visible pass times and, from time to time, I’ll go watch the ISS fly over.  In fact, I was out with my 4yo son watching “Father Christmas” going over on Christmas Eve.  That was truly magical.

If you want to follow the ISS in real time there are numerous sites, one example is iss.astroviewer.net. This shows not only its position over the globe, but also an virtual “astronauts” view using the satellite view on Google Maps to provide a ground track

So the idea of an ISS tracker was born.  I initially toyed with the idea of “drawing” the globe in blue and green on the grid, but it just looked like a very bad image from an 80s video game.  An overlay was called for, having used one previously in the Word Clock project, but how should it look?

I looked at a whole world map, but with only 8 “pixels” to play with it provided very limited scope.  That and the map would be a rectangle, not a square.  A globe image was required, and of course it needed to have a clear image of the UK (where I live!).

In an ideal world I wanted a picture with the UK right in the middle, but my Google image search turned up the image below as the nearest to that.  If anyone finds a better one let me know! Having researched trackers there are lots of sites that provide handy APIs to get the current latitude and longitude of the space station.  I settled on using wheretheissis.at as this provided the most comprehensive information I could find in an API.

All the coded needed to do was pull down the JSON provided by the API then parse the data for the values it needed. Below is an extract to show you how this is done

Now to display the ISS.  The visible globe is essentially half of a sphere and so represents 180º in both the latitude (top/bottom or North/South) and longitude (left/right or East/West).  With only 8 pixels that means each LED represents 22.5º of the Earths’ surface.

To display the location of the ISS we take the current lat/long of its position over the Earth and map that to the pixel/LED it falls into.  That’s all well and good when it’s on the “visible” side of the globe in the overlay, but what to do when it goes “behind” our overlay?

Rather than make the ISS “disappear” I opted to still display it but in a different colour so it can be tracked as it reappears on the visible side of our globe.  So now the LED lights up yellow for the visible side of the globe and blue when the ISS passes over the horizon to the rear of the planet. 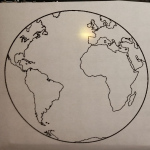 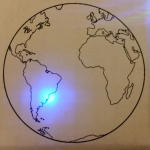 The other thing to note is that the middle of this globe image is not the meridian (zero longitude).  I estimated it is around 20º West (or -20º) so the code has an offset for this.

Like all good projects I ended up with scope creep…. by me! I should know better really.

After working with the API for a while I started reading about Two Line Element (TLE) data.  The ISS (and a lot of other space objects) are highly predictable in their orbits and so can be calculated.  That’s how the APIs work, and how sites like @VirtualAstro can provide a timetable of sightings.

It appears celestrak.com is the place to go for the the data which they get from NORAD (US military).

But how to use this?  I found a couple of python libraries and settled on pyorbital which can be installed with

This now meant that, so long as the application had a recent version of the TLE for ISS it would know where the astronauts would be.  This is ideal for taking to a Jam where connectivity might be patchy.  The TLE will need refreshing every so often as manoeuvres by the ISS will change its flight path, altitude etc.

Change 2: LCD for headless use

I decided to run this headless and to do this I made use of an AdaFruit LCD addon.  This allows the application to output the lat/long, altitude, azimuth and elevation without the a screen.  Again, a bonus for Jams as less to transport.

There’s one catch with the UnicornHAT; it doesn’t have any exposed GPIO pins, where as the LCD has an extended header (luckily).  So the LCD is plugged into the GPIO and jumper wires are used to connect the UnicornHAT.

The rest can be safely ignored (source)

Video, Code, and a Note

A video of the final project in action

My source can be found on GitHub with my other projects.  Have fun and let me know how you get on.

One final note.  Just because the ISS is above the visible horizon (anything below 10º is not considered visible) it doesn’t mean it can be seen.  The ISS doesn’t emit it’s own light (well, not enough to be seen from Earth).  It can only be seen if the sun is reflecting off the space station, so the conditions to be able to see the ISS are:

This is why it can only be see for a week or two every few months.  Head over to somewhere like www.meteorwatch.org to find the best times.  At the time of writing there are numerous opportunities from now until 23rd Feb 2015, after that will be April 2015, and so on.