Cheerlights is a IoT based light control system, originally intended to allow social media to dictate the colour of festive lights around the world.

How does it work?

Put the word Cheerlight and a colour in a tweet and you’ve just told light systems around the world the colour they should show.  On the website is a list of the currently supported colours.

On the back-end there is a feed aggregator which exposes a JSON, TXT or XML API.

My plan was to use the Pimoroni Unicorn HAT to display the most recent 64 colours from the “Full” feed.  Unfortunately I first started playing with this during my lunch hour at work….. where I didn’t have a Pi.  So I wrote a console app in Python to read the JSON, output all the available colours, and then poll the “Last” feed for updates.

Time to put a HAT on

I wrote some code without the Unicorn HAT to hand then tested it when I got home (there weren’t too many bugs!).  Rather than using the UnicornHAT Python module I chose to use the underlying ws2812 module.  Madness you say?  But no! The Unicorn HAT is just a matrix of NeoPixles which means any ws2812 device should “just work”.  Up until now I could only control my 16 pixel NeoPixel from the Pi using a micro controller (read Arduino clone) as an interface.  So I wired it up; the data line goes to GPIO18 (via a low value resistor to reduce risk of power spikes) and +ve to 3.3v, otherwise we’ll blow up the Pi!  It worked as advertised first time – bonus. In the code there is a maxPixels variable to allow you to limit the number of pixels you wish to light.  The 64 NeoPixels on the UnicornHAT are wired in a left to right/right to left pattern so it goes

up to 64.  So as the new colour is added the pattern shifts down in a “snake” like way.

The colours are translated to RGB values via a dictionary of the supported Cheerlight colours.

This section is UnicornHAT specific as the Python module allows you to treat the pixels as a grid, which makes it easier to draw patterns.  It’s Christmas, and Cheerlights was devised for the festive season, so a tree is the obvious choice.

I ended up with three modes; 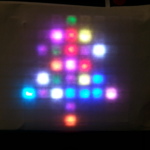 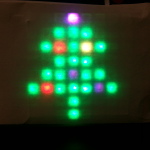 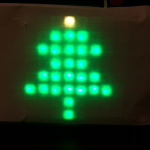 The tree patten is defined by as a list of pixel co-ordinates.  The above pictures have some white paper over the pixels to diffuse the light which gives a nice effect.

Well, that’s that.  I hope a few of you reading this have a play with the code, be it with generic NeoPixels or a Unicorn.  Let me know how you get on in the comments below.